Ottawa is the capitol of Canada so it, along with Gatineau and Hull on the Quebec side of the river, is loaded with museums, galleries and parks. I wasn’t in Ottawa long enough to have images that show a complete coverage of the city.  I primarily took photos a tourist would take, including quite a few images of the Parliament Library. This magnificent structure, my favourite building in Ottawa, was the only thing saved when the Centre Block burned in 1916. 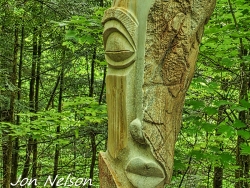 This sculpture - called 'Dreaming' - is found at the Humanics Sanctuary and Sculpture Park near Ottawa. (HDR image) 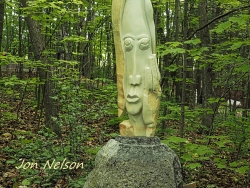 The 'Thinking' sculpture seems to be serenely composing her thoughts. This sculpture stands near one end of the Humanics Sanctuary and Sculpture Park. 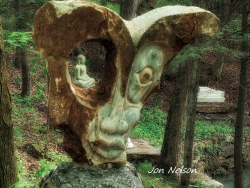 My favourite sculpture at the Humanics Sculpture Park is entitled "Vision' and a sculpture of the Buddha can be seen through the eye of this sculpture. (HDR image) 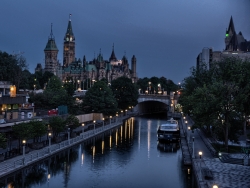 The Rideau Canal in downtown Ottawa at dawn is peaceful. (HDR image) 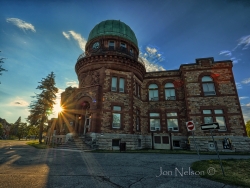 Dominion Observatory Building was Canada's astronomical observatory that operated from 1902 to 1970. (HDR image) 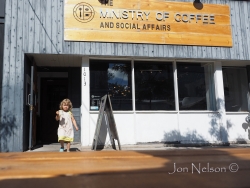 Although the Ministry of Coffee and Social Affairs is located on Wellington Street it would be a long walk for members of Parliament. 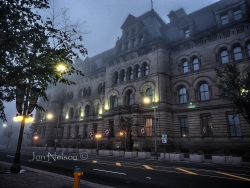 The Langevin Block holds the Executive Branch of the government including the Prime Minister's Office. (HDR image) 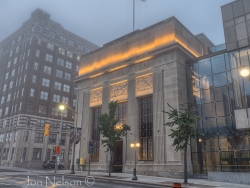 This former Bank of Montreal building was converted into a renovated and expanded government building now known as the Sir John A. Macdonald Building. (HDR image) 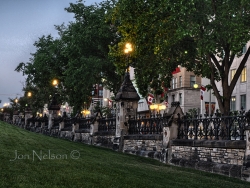 This is a portion of the stone and wrought iron fence that runs along Wellington Street in front of Parliament Hill. (HDR image) 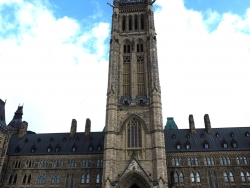 Peace Tower is located in middle of the Centre Block 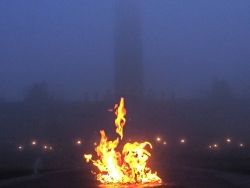 The Centennial Flame burns brightly in front of the Peace Tower on an extremely foggy morning. 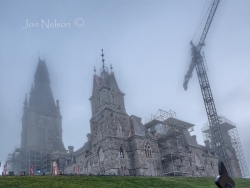 The West Block is under construction in preparation for Canada's 150th Anniversary in 2017. 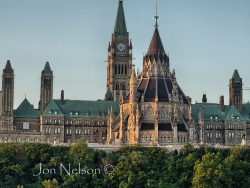 The Parliament Library as seen from across the Ottawa River. Center Block is in background. (HDR image) 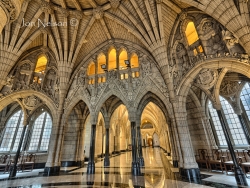 Standing in the main foyer of the Center Block, the hallway leading to the Parliament Library is in centre of image. (HDR image)

Wide angle image from inside the entrance to the library. (HDR image) 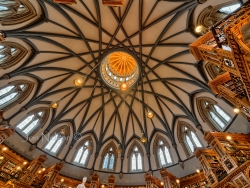 Looking up into the dome that forms the roof of the Parliament Library. (HDR image) 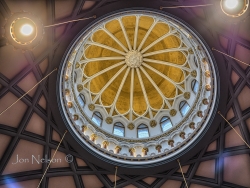 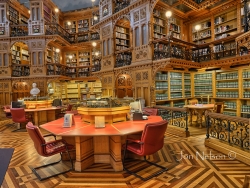 Desks and book shelves can be seen inside Parliament Library on a day Parliament was not in session. (HDR image) 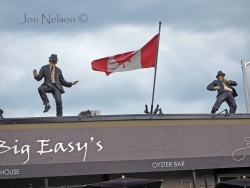 The Blues Brothers play non-stop on top of Big Easy's on Preston Street in Ottawa, Ontario. 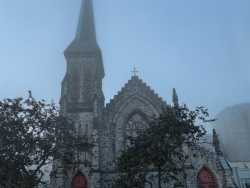