Quetico celebrated its 100th Anniversary last year. Quetico was originally set aside in 1909 as the Quetico Forest Reserve, became a Provincial Park in 1913, logging was banned in 1972 and it was declared a wilderness park in 1978. Quetico is characterized by towering cliffs, rocky islands and sandy beaches in a watery landscape of clear water lakes, rivers, creeks and bogs. These compelling attributes that attract canoeists to Quetico are primarily the results of the actions of glacial ice and glacial meltwater at the end of the last Ice Age.

Although glaciers at the peak of the last Ice Age covered most of Canada, thousands of years of erosion and plant growth have greatly muted the glaciers actions. In Quetico, however, glacial activity and the erosive power of water released from the melting glacier are clearly etched into the landscape. Moraines and eskers, although now covered with vegetation, can be seen as low ridges winding through the landscape. Large glacial erratics, boulders carried by glacial ice and deposited some distance from their place of origin, are plentiful and a particularly impressive one is located in the narrows leading to Fred Lake. Rocks embedded in the ice left linear scratches (glacial striae) that are visible on the shores of many of Quetico’s lakes, including Saganaga, Knife, and Sturgeon. As a bonus for canoeists, glacial activity left Quetico Park with a landscape – half water with most of the portages less than two hundred metres long – that is ideal for travel by canoe.

Twelve thousand years ago, the land that is now Quetico Park was being released from beneath a retreating glacier. This seemingly inhospitable mixture of rock and water did not remain barren for long. Tundra vegetation quickly became established and barren ground caribou and other grazing animals soon populated the land. These animals were prey for Palaeo-Indians who followed them across the landscape. Quetico may have also been briefly populated by Ice age megafauna – woolly mammoths, mastodons, dire wolves (wolves almost twice as large as today’s timber wolves) and beaver that weighed 500 pounds (over 200 kilograms). British zoologist Alfred Russel Wallace was referring to the extinction of these ice age megafauna when he noted: “We live in a zoologically impoverished world, from which all the largest, the fiercest, and strongest forms have disappeared.” It’s obvious that much was lost in the millennia since the glacier retreated but much has also been gained.

Quetico continues to evolve and change. Today’s Quetico is a captivating blend of deciduous and boreal forests with a sprinkling of species from the prairies. As a result, organisms as diverse as Calypso orchids and caribou lichen, silver maple and stunted black spruce, prairie goldenrod and wild ginger, all grow in a land where whisky jacks overlap with blue jays, moose co-exist with white-tailed deer and bog lemmings live near woodland jumping mice.

The protection given Quetico in 1909 and the resolve of people to make it a wilderness park allows us to paddle today in a Quetico that is very similar to what it was one hundred years ago. Native peoples have been an integral part of Quetico since the first Palaeo-Indians arrived over eleven thousand years. To a large extent, their stewardship was responsible for the relatively intact state of the ecosystem when the area was protected in 1909. One of the primary reasons for the strong appeal of Quetico Park is that the heavier and more destructive hand of modern man has had relatively little negative impact. The activities of fur traders, trappers and prospectors left relatively few scars.

When logging was halted in 1972 almost half of Quetico had never been logged. The clear cuts that were created in the late 60’s and early 70’s are now about forty years old and are becoming young forests. These areas were used by moose researchers studying the behaviour of bull moose during the rut and by forest ecologist comparing re-growth after logging and forest fires.

For a wilderness park, it is ironic that some locations are of particular interest because of — not in spite of — the long record of human use and habitation. In addition to the campsites used by early explorers and voyageurs, some sites were used by Palaeo-Indians not long after the glacier’s retreat and are still used by canoeists.

Archaeological sites on the Canadian Shield are fragile and subsequent to erosion. Quetico has a few sites that span the entire known human history in the park. Now that the significance of these sites is known, they deserve to be treated with care. There are currently concerns that unless greater precautions are taken, the human activities at heavily used areas – such as the Prairie Portage ranger station at the southern boundary of the park – will greatly damage the rich evidence of thousands of years of human history at the site.

Over the last one hundred years, Quetico – considered by many to be the finest canoeing park in the world – has changed from a forest reserve visited by a few hundred people to a wilderness area that attracts thousands of canoeists from around the globe. Quetico’s landscape remains a magnificent merger of sculpted bedrock with water and northern pine forests. It also has the added attractions of timber wolves, moose, bald eagles, loons, northern lights, old-growth white pine and excellent fishing in a landscape having the greatest concentration of aboriginal rock paintings in eastern North America.

If we use it with care and vigilantly work to maintain its wilderness integrity, Quetico Park’s appeal should escalate for hundreds of years to come.

In the United States, the book can be ordered from a variety of sources including Piragis Boundary Waters Catalog, Amazon.com and Barnes and Noble. 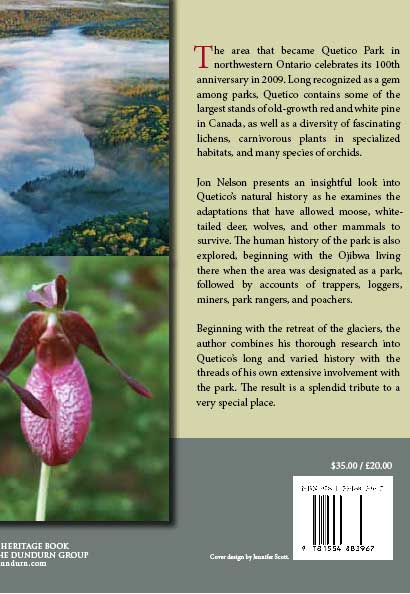