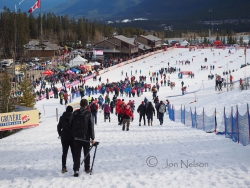 The Men's Classic Pursuit was the last race and this is a view of spectators headed down after the race.
◄ 1 2