The photos shown in this panorama of the Summer Solstice, Autumnal Equinox and Winter Solstice sunrises were taken in Thunder Bay, Ontario. All photos were taken from the same spot in Marina Park on the shore of Lake Superior. This three season panorama shows the extent of the suns movement across the eastern horizon as the year progresses. The three photos were taken within a few days of the actual equinox or solstices. Thunder Bay is located far enough north that the rising sun makes a dramatic sweep from northeast to southeast across the horizon as the year progresses from the summer solstice to the winter solstice. 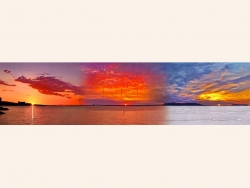 The Sleeping Giant at the foot of the Sibley Peninsula provides a dramatic backdrop for the movement of the rising sun as the seasons change in Thunder Bay, Ontario. The panorama - taken from Marina Park - shows the rising sun progressing from its northeast extreme on the summer solstice to its southeast extreme on the winter solstice when the Thunder Bay harbour is frozen. 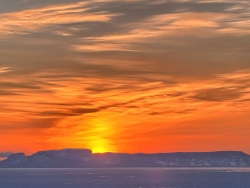